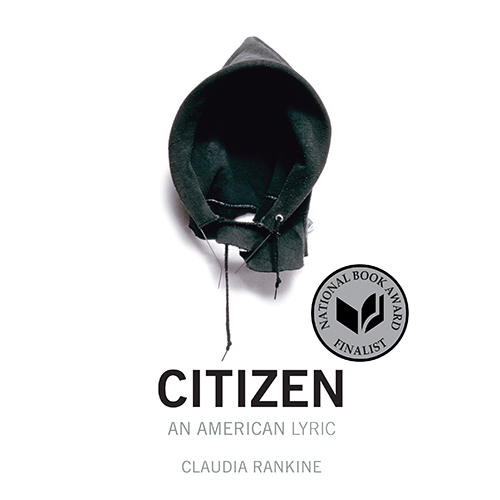 MINERAL POINT, Wis.—Together with the Mineral Point Public Library and Mineral Point School District libraries, Shake Rag Alley Center for the Arts invites the public to come together during the rescheduled NEA Big Read of “Citizen: An American Lyric” beginning Sept. 24 and running through November.

Originally scheduled for April, a month of activities had been planned around Claudia Rankine’s award-winning innovative work of poetry, prose, and art that addresses the individual and collective effects of racism. But when the COVID-19 pandemic prompted the statewide shutdown this spring, the NEA Big Read was put on hold and a program of free and largely virtual events is being developed for this fall.

An initiative of the National Endowment for the Arts in partnership with Arts Midwest, the NEA Big Read broadens our understanding of our world, our communities, and ourselves through the joy of sharing a good book. Shake Rag Alley was one of 78 nonprofit organizations nationwide to receive an NEA Big Read grant to host a community reading program in 2019-20.

The NEA Big Read showcases a diverse range of titles that reflect many different voices and perspectives, aiming to inspire conversation and discovery during dynamic community reading programs designed around a single selection.

“When our NEA Big Read Committee chose ‘Citizen’ from among more than 30 books for its use of poetry and art to explore the impact words have on concepts of identity and inclusion, we could not have anticipated the nationwide protests against systemic racism touched off this summer by George Floyd’s murder in Minneapolis,” said Shake Rag Alley Executive Director Sara Lomasz Flesch. “Claudia Rankine’s book remains as relevant as when it was first published in 2014 and turned a spotlight on the microaggressions that compound the trauma of racism.”

Beginning Sept. 24, the NEA Big Read of “Citizen” will feature a virtual kickoff event via Zoom that will detail the planned events and ways to access and engage with the book and its themes including:

Shake Rag Alley
In the News

Greetings from Shake Rag Alley, where on the eve of the Fall Equinox we are enjoying cooler temperatures and nature’s changing color palette. We’re just days away from the kick-off of our rescheduled and mostly virtual NEA Big Read of Claudia Rankine’s “Citizen: An American Lyric” as well as our fourth annual and for the first time virtual Writing Retreat, and we’re looking forward to hosting a dozen in-person workshops in blacksmithing, fiber arts, jewelry, and mixed media in October.

We continue to prioritize the health and safety of our workshop and event participants and lodging guests in light of the COVID-19 pandemic. If you’re looking for a safe place to enjoy the change in seasons and stretch your creative muscles, Shake Rag Alley and Mineral Point are great Driftless weekend destinations.

Read on for the many ways you can engage with Shake Rag Alley in the coming month! If you have any questions or concerns, please contact us at info@shakeragalley.org or (608) 987-3292.

Registration for this weekend’s fourth annual three-day Writing Retreat has closed, but there’s still time to register for these free and low-cost a la carte events and craft talks.

Access deeper levels of visualization and sensory recall, in preparation for writing, through simple drawing activities. 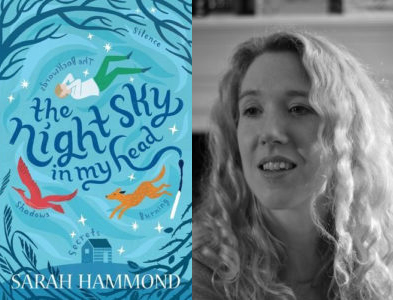 What is narrative distance? Often defined as the distance between the narrator of a story and its characters, it establishes the point of view accessed by a reader and structures the authorial voice of every genre. Explore the power of narrative distance and consider how it impacts possibilities and limitations in your writing. 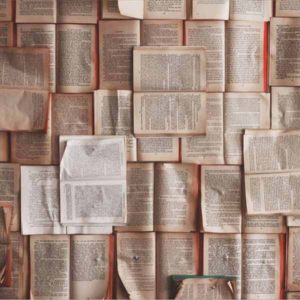 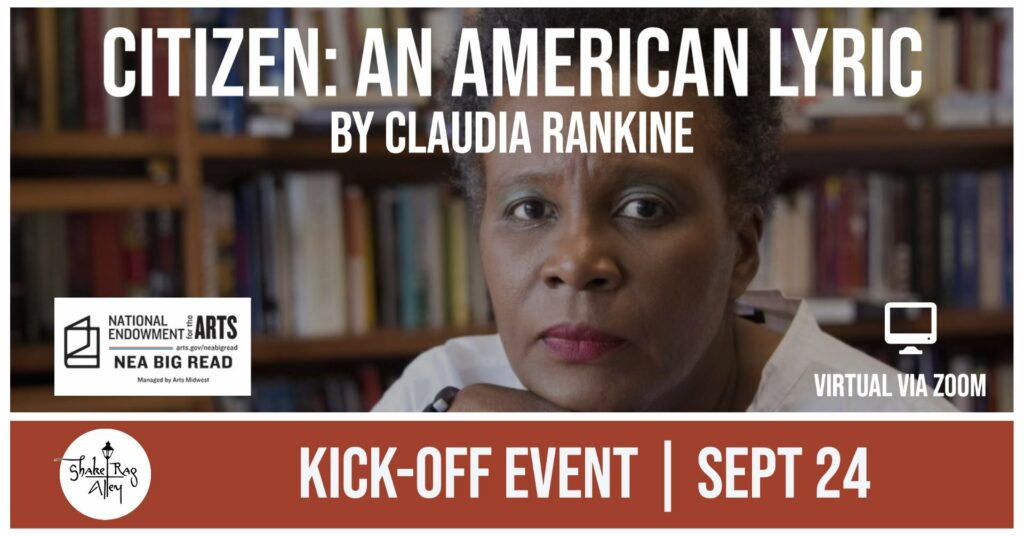 Together with the Mineral Point Public Library and Mineral Point School District libraries, Shake Rag Alley Center for the Arts invites the public to come together during our rescheduled and mostly virtual NEA Big Read of Citizen: An American Lyric beginning Sept. 24 and running through November. Below are details on September and October events scheduled to date. Watch our website for more ways to engage with the book! Copies of Citizen are available at the Mineral Point Public Library and Shake Rag Alley, or by emailing info@shakeragalley.org.

Join us virtually for the launch of our NEA Big Read of Citizen: An American Lyric, by Claudia Rankine. Learn more about this text, why it was chosen, where to get your copy, and how to access the many events, discussions, and opportunities planned in conjunction with this project.

Eric Charles May, author of Bedrock Faith, will present a craft talk on Writing About Race in conjunction with this year’s Writing Retreat. May was named the 21st Century Author for the Chicago Public Library Foundation’s Charles Sandburg Awards in 2015. 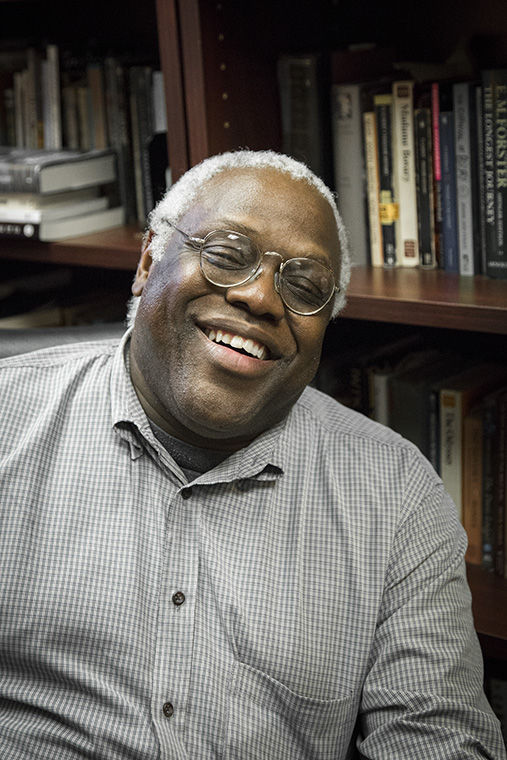 Presenter Philip Hartigan is a faculty member of the Columbia College Chicago Study Abroad program in Paris, where every January he teaches a class called Creative Writing: American Writers in Paris. 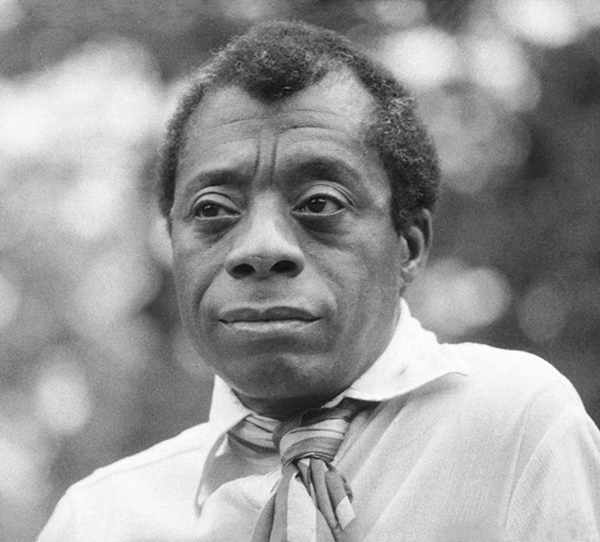 African-American writer James Baldwin emigrated to Paris in 1948 and lived there for most of the following ten years. During his time in Paris, he completed two of his greatest works of fiction (Go Tell it On the Mountain and Giovanni’s Room) and published numerous essays describing the experience of being a Black American writer in France. This illustrated talk, which is being held in conjunction with our Writing Retreat, discusses the influence of Paris and its artistic community on Baldwin, including the ways in which Baldwin’s time in France led him to reconnect with the United States and the growing Civil Rights movement.

Beginning Oct. 1, we will meet weekly via Zoom to discuss the poetry, art, and ideas of Citizen: An American Lyric, by Claudia Rankine, chapter by chapter. 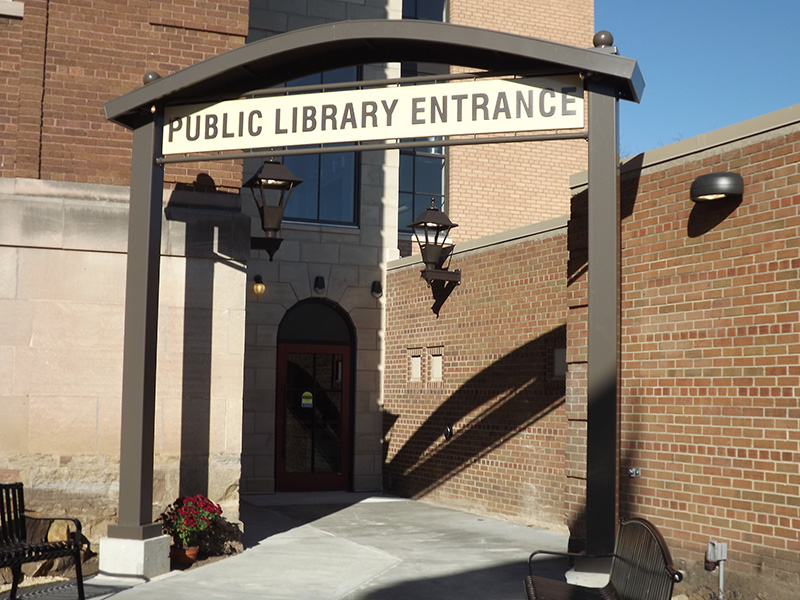 The Driftless Poets invite you to join them during their in-person workshop time outside on the Green at Shake Rag Alley to discuss and share poetry inspired by Citizen: An American Lyric. In the event of inclement weather, the discussion will move indoors to the spacious Lind Pavilion. Please register to help us plan accordingly. 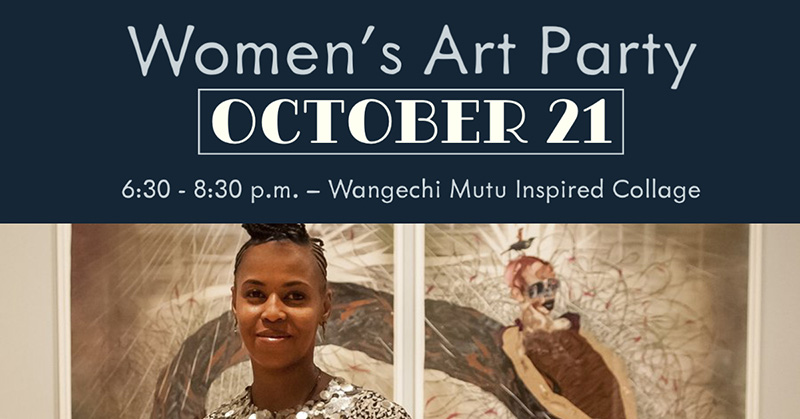 Using women’s magazines from the 1930s through the 1970s, we will generate work reflective of collagist Wangechi Mutu, featured in Citizen: An American Lyric by Claudia Rankine. Gather safely in the Lind Pavilion, 411 Commerce St., and generate imaginative collages. Vintage magazines will be used and will surely inspire great conversation!

Use a gas forge to create an attractive garden gate for your yard. This is an intermediate class so you need to have taken at least one of the beginning classes in either coal or gas forging.

Begin with a pre-welded rectangle as a base for adding forged cattail leaves and stems, with optional dragonfly, bird, and fish shapes. Welding will be provided to attach the forged components together.

Get your iron hot in the forge, swing your hammer over the anvil, and make attractive, veined iron leaves and flowers that can embellish all kinds of useful home and garden projects.

Weave a traditional “rag” rug on an antique heavy-duty loom made just for this purpose. You will be making a serious piece of floor covering, about 28″ wide and 5′ long. The looms are warped and ready to go — just show up and weave!

The Chaos of Perfection
Oct. 3 (Register by Sept. 21)
Maday Delgado

Create a running-stitch journal using improvisation and raw edge hand-stitching with a variety of threads to make a product that is true to the maker’s style, and compliments sustainable living. 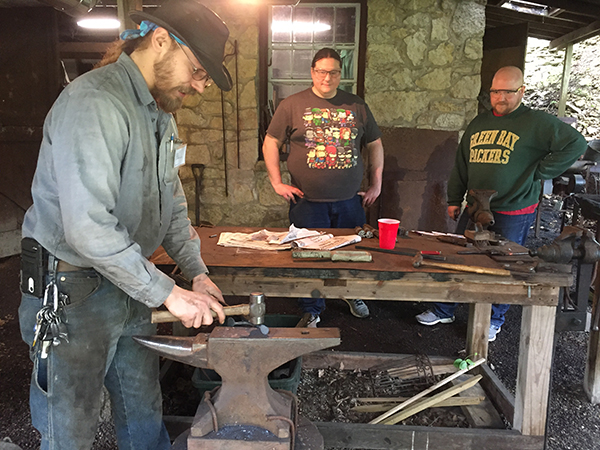 Make a handsome, handy campfire set that will include a knife, fork, and spoon.

Create your own unique .999 pure silver ring using precious metal clay silver and wear it home. Learn the techniques to size, form, refine, embellish, and set a fire-in-place stone into your ring.

Combine dichroic glass with its ethereal opal-like quality with PMC to make amazing fine silver and glass pendants or earrings.

Learn traditional methods of forging steel on a coal forge, hammering it into handy hooks of many shapes, and even working it into decorative leaves for key rings and other uses.

Explore surface techniques building a collage palette that will stretch new awareness and growth. Emphasis will be on working in a series.

SAORI is a weaving style with no rules and restrictions. There are no samples to follow and there are no mistakes. Just weave what you want to with complete freedom and creativity. The irregular edges and accidental skips of thread add un-programmed beauty to each weaving. In SAORI, we do not weave only a cloth. We weave our true selves.

Bengala dyes are made from soil and are “environmentally safe” and fun to use. You will love the subtle nature of the colors. Everyone will learn about the history and cultural significance of this unique dye form.

If a workshop you are interested in has sold out, please sign up for the waiting list to be notified of any openings. Sometimes instructors are willing to squeeze in one or two more!

don't see a workshop you wanted? design your own!

Let us work with you to secure an artist-instructor to lead a workshop just for you and a small group of family or friends. Feel stress melt away as you break dishes to make a whimsical mosaic bird bath – or hammer copper wire to make a beautiful necklace – or don leather gloves and goggles to learn blacksmithing skills. There are endless possibilities to be creative at Shake Rag Alley. Each day of your custom retreat begins on our idyllic 2.5-acre campus with workshops held in our historic and charming buildings. Meals may be picked up from one of Mineral Point’s cafes or restaurants, and many businesses in our artistic community are open or take appointments. The day ends with a peaceful night’s sleep in our unique, historic lodging. 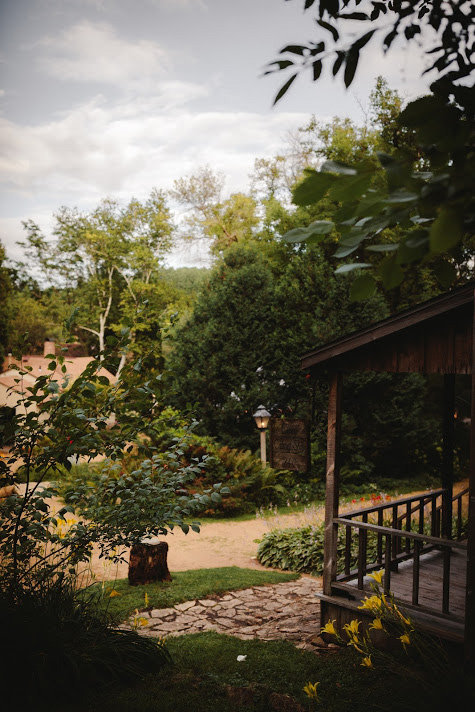 Book time in any of our cozy lodging spaces at discount prices Mondays-Thursdays. Students registered in our workshops enjoy even greater savings with a 10% discount! 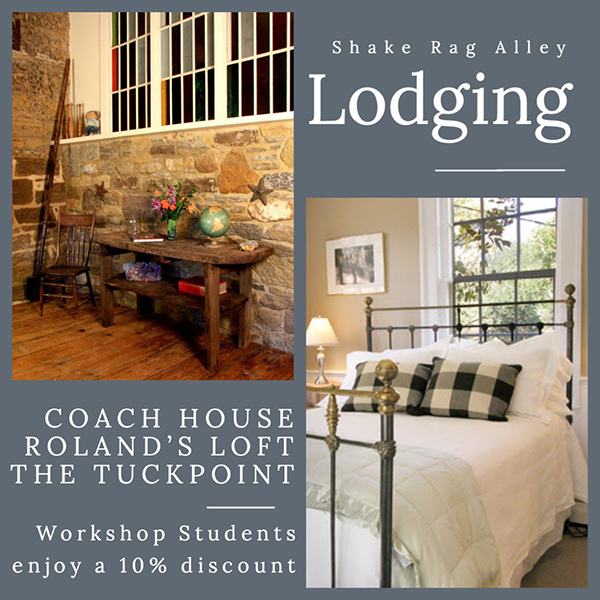 Our regularly scheduled Women’s Art Party sold out in a day, so we’ve added another! Spots still remain to safely join Carole in the Lind Pavilion this week to make these adorable and seasonally appropriate pumpkins. 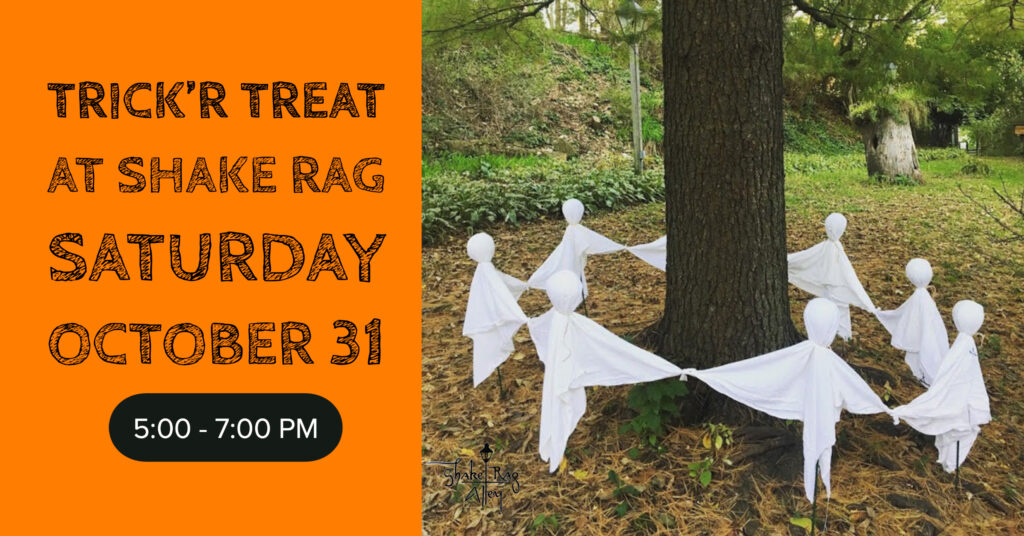 If you are a kid or want to act like a kid – put on your wildest costume and come to Shake Rag Alley. Children of all ages will meet friendly (not scary) costumed characters who safely will be passing out Halloween treats at each of the Shake Rag historic buildings. This Mineral Point tradition is enjoyable for the whole family and a way to enjoy the wacky get-ups of other free spirits. 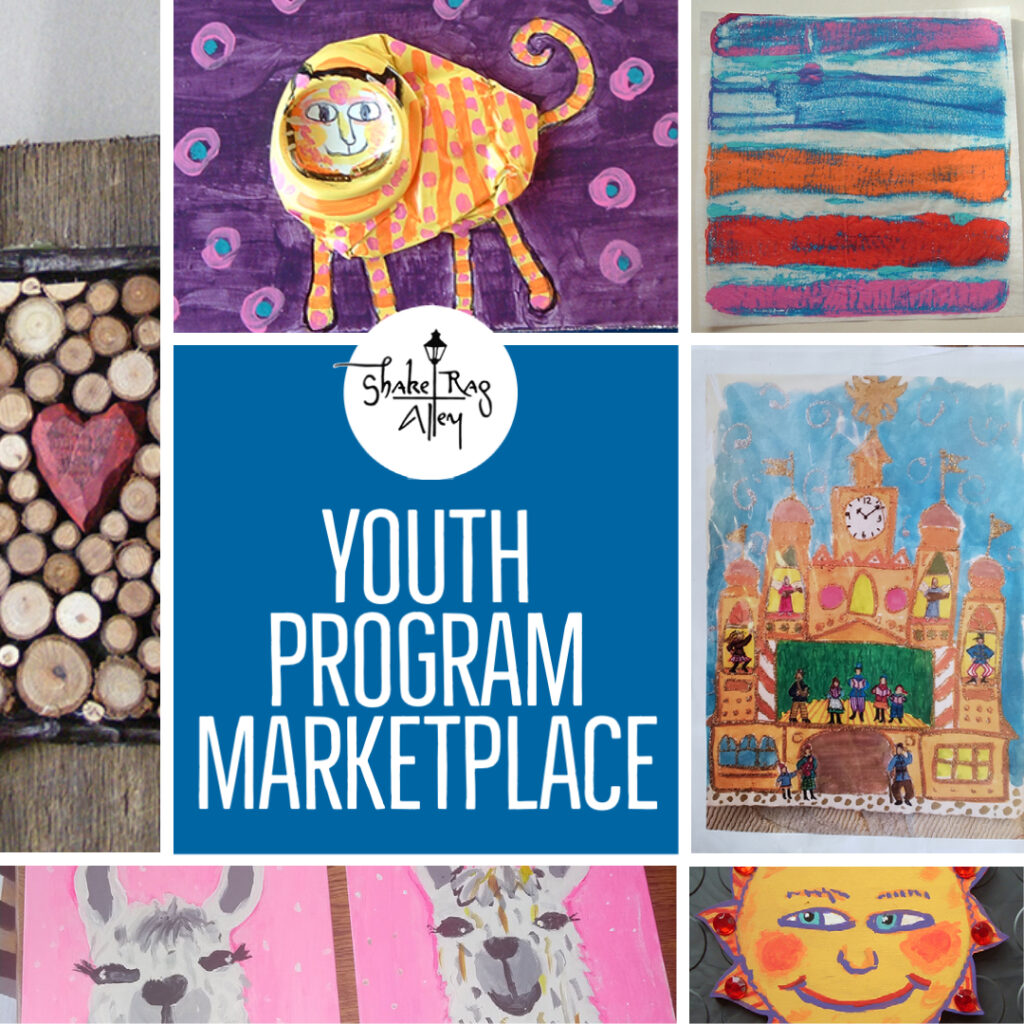 Keep those restless hands busy with at-home art kits based on our most-popular summer Youth Program workshops. Instructions and video demonstrations, where applicable, are available on our Youth Program Instructions page. Kits can be mailed or picked up curbside at Shake Rag Alley. If you have any questions, please call (608) 987-3292.

send us your photos!

We love receiving pictures of projects completed or begun during workshops at Shake Rag Alley in their home environment—like this stunning rag rug woven by Maija!

Please send us your photos via email or tag us on Facebook so that we can include your amazing handiwork on our Workshop & Event Gallery page or feature them in upcoming newsletters.

We also welcome (and thrill to see) work completed by youth. Take a look at some of the wonderful work already received in our Youth Program Gallery!

Shake Rag Alley Center for the Arts is supported in part by a grant from the Wisconsin Arts Board with funds from the State of Wisconsin and the National Endowment for the Arts.

Youth programming at Shake Rag Alley Center for the Arts is supported in part by a grant from the Mineral Point Community Chest and United Fund of Iowa County.